PC gaming monitors are getting supersized this summer.

"PC gamers expect high performance and instant response times, but, until now, they've been largely limited to traditional desktop displays," said Matt Wuebbling, head of GeForce marketing at NVIDIA. "BFGDs change that. With NVIDIA's latest technology built into these new displays, PC gamers can now experience their favorite titles in all the low-latency glory they deserve." 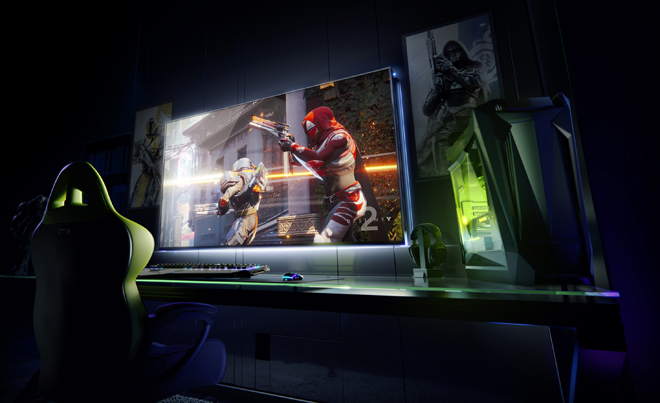 NVIDIA BFGDs have been developed in collaboration with hardware partners Acer, ASUS, and HP. The displays feature 65-inch 4K HDR screens with full-array direct backlights, 1,000-nit peak luminance, and support for the DCI-P3 color gamut. In addition, the panels use NVIDIA G-SYNC HDR technology to synchronize the screen's 120Hz refresh rate to that of the game being played, enabling a highly responsive, smooth, tear-free experience. And beyond gaming capabilities, the displays also incorporate the Android TV-based SHIELD for access to streaming apps like Netflix, Amazon Video, YouTube, and Hulu, along with Google Assistant support for voice control. A SHIELD remote and game controller are bundled with the monitor as well.

Pricing has not been announced yet, but the first BFGDs from Acer, ASUS, and HP are set to launch this summer.