'About Schmidt' Hopping in the Blu-ray Winnebago this February!

In an early announcement to retailers, New Line Cinema will be bringing 'About Schmidt' to Blu-ray on February 3.

Warren Schmidt (Jack Nicholson) is about to taste a not so sweet slice of life. When he retired, he and his wife Helen had big plans, but an unexpected twist changed everything. Now, all of Schmidt's attention is focused his daughter's upcoming wedding to a loser waterbed salesman. From meeting hippie parents to sponsoring a Tanzanian foster child, Schmidt embarks on a search for answers... and discovers that life is full of trick questions.

You can find the latest specs for 'About Schmidt' linked from our Blu-ray Release Schedule, where it's indexed under February 3. 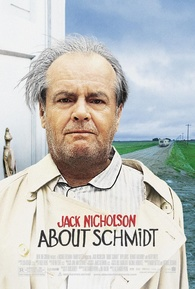