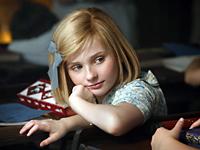 Based on the wildly popular line of dolls for young girls, 'Kit Kittredge: An American Girl' grossed only $15 million domestically despite being one of the better-reviewed films of the summer.

New Line/Warner will roll out the family-friendly adventure on Blu-ray October 28, day-and-date with the standard DVD.

Early tech specs indicate 1080p/VC-1 video and standard Dolby Digital 5.1 Surround audio, and there are no announced extras. Further details are expected in the days ahead, however, so we'll keep you updated.

Suggested retail price for the Blu-rays has been set at $38.95.

You'll find the latest specs for 'Kit Kittredge: An American Girl' linked from our Blu-ray Release Schedule, where it's indexed under October 28.

Discs mentioned in this article: (Click for specs and reviews)
Kit Kittredge: An American Girl (Blu-ray)