Netflix, DC Universe, and Amazon Prime Video have all released new previews and info for several of their upcoming series and films.

Dating Around (Netflix, February 14) - Every episode, one single goes on five first dates filled with flirty banter, awkward exchanges and moments of true connection. Who will get a second date? Netflix's first original dating show takes an honest and compelling look at the real world of dating.

Ken Jeong: You Complete Me, Ho (Netflix, February 14) - Comedian, actor and former physician Ken Jeong returns to his stand-up roots for his first-ever Netflix comedy special, Ken Jeong: You Complete Me, Ho. Filmed at the Ice House Comedy Club in Pasadena, California, where Jeong first got his start in comedy, You Complete Me, Ho reflects on how Jeong went from being a doctor to a comedy superstar and opens up about how his wife’s courageous battle with breast cancer led to him starring in one of the biggest comedy franchises of all time, The Hangover. The special is directed and executive produced by Jon M. Chu, who also directed Jeong in the groundbreaking box office phenomenon Crazy Rich Asians.

Larry Charles’ Dangerous World of Comedy (Netflix, February 15) - Follow the director of Bruno and Borat, Larry Charles as he travels around the world to find comedy in unlikeliest of places. From the U.S., Iraq, and Nigeria to Somalia and Saudia Arabia, we discover the rich comedy cultures thriving in dangerous places around the world and the people keeping it alive despite difficult circumstances. In this 4 part series, we see how people use comedy and laughter to overcome some of the most difficult circumstances and issues in unexpected places around the world.

Walk. Ride. Rodeo. (Netflix, March 8) - Amberley Snyder (Spencer Locke)’s dreams of a college scholarship and pro rodeo career are brought to a halt when she's involved in a devastating accident. Now unable to use her legs, she refuses to give up on her dreams and instead decides to fight her way back into competitive barrel racing. Based on the incredible true story, Walk. Ride. Rodeo co-stars Missi Pyle, Bailey Chase, Sherri Shepherd, and Max Ehrich.

Our Planet (Netflix, April 5) - Narrated by Sir David Attenborough, this eight-part series will explore the unique and precious wonders of our natural world from the creators of the award-winning series Planet Earth. In partnership with World Wildlife Fund, Our Planet combines stunning photography and technology with an unprecedented, never-before-filmed look at the planet’s remaining wilderness areas and their animal inhabitants. The ambitious four-year project has been filmed in 50 countries across all the continents of the world, with over 600 members of crew capturing more than three and a half thousand filming days, and will focus on the breadth of the diversity of habitats around the world, from the remote Arctic wilderness and mysterious deep oceans to the vast landscapes of Africa and diverse jungles of South America.

Sex Education: Season 2 (Netflix, Coming Soon) - Netflix announced that the series has been renewed for 8 new episodes of the frank, heartfelt, honest and hilariously awkward series. Season two is slated to begin production this spring in the UK. Gillian Anderson, Asa Butterfield, Emma Mackey, Ncuti Gatwa, Aimee-Lou Wood, Connor Swindells, Kedar Williams-Stirling, Tanya Reynolds and Patricia Allison are set to reprise their roles. Creator Laurie Nunn will return as creator and executive producer with Jamie Campbell set to executive produce alongside Nunn. Eleven will continue as the production company for the second season of the breakout series.

In addition, Netflix has also announced development on an adaptation of the BOOM! Studios graphic novel Last Sons of America. The project will be a collaboration with 6th and Idaho and Estuary Films. Josh Mond is attached to write and direct and actor Peter Dinklage is set to star. Here's a synopsis per Netflix:

In the not too distant future, Americans are no longer able to conceive and children have become a valuable commodity around the globe. Brothers Jackie and Julian (Dinklage) are operating as adoption agents in Colombia, securing deals with families willing to give their children up for a presumably better life in America. When the brothers suddenly find themselves with their backs against the wall, Jackie makes a grave mistake that sends them spiraling into a dark mystery at the root of their world’s status quo; a mystery much darker than they might be able to bear. 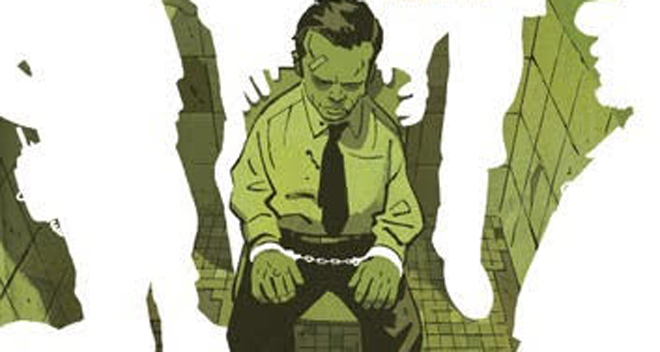 Doom Patrol (DC Universe, February 15) - Reimagines one of DC’s most beloved groups of Super Heroes: Robotman aka Cliff Steele (BRENDAN FRASER), Negative Man aka Larry Trainor (MATT BOMER), Elasti-Woman aka Rita Farr (APRIL BOWLBY) and Crazy Jane (DIANE GUERRERO), led by modern-day mad scientist Niles Caulder aka The Chief (TIMOTHY DALTON). Each member of the Doom Patrol suffered a horrible accident that gave them superhuman abilities, but also left them scarred and disfigured. Traumatized and downtrodden, the team found their purpose through The Chief, coming together to investigate the weirdest phenomena in existence. Following the mysterious disappearance of The Chief these reluctant heroes will find themselves in a place they never expected to be, called to action by none other than Cyborg (JOIVAN WADE), who comes to them with a mission hard to refuse. Part support group, part Super Hero team, the Doom Patrol is a band of superpowered freaks who fight for a world that wants nothing to do with them.

Tin Star: Season Two (Amazon Prime Video, March 8) - Set in the majestic Canadian Rockies, Tin Star tells the story of a former British detective who brings his family to the tiny, tranquil town of Little Big Bear for a better life. But when his small town is overrun by migrant workers from a massive new oil refinery, the wave of organized crime that follows them threatens to sweep away everything in its wake and dig up the past.