The legendary filmmaker's unfinished movie is being completed and restored.

Netflix has announced that it will be acquiring global rights to Orson Welles’ last film, 'The Other Side of the Wind.' The company will also finance the completion and restoration of the unfinished movie.

The film, a satire of Hollywood, focuses on the last days of a legendary film director named Jake Hannaford (played by John Huston), who is struggling to forge his last great comeback as a major filmmaker. Hannaford is hard at work on his final masterpiece, The Other Side of The Wind. Additional cast members include Peter Bogdanovich, Oja Kodar, Robert Random, Lilli Palmer, Edmond O’Brien, Cameron Mitchell, Mercedes McCambridge, Susan Strasberg, Norman Foster, Paul Stewart, and Dennis Hopper.

"Like so many others who grew up worshipping the craft and vision of Orson Welles, this is a dream come true," said Ted Sarandos, Netflix Chief Content Officer. "The promise of being able to bring to the world this unfinished work of Welles with his true artistic intention intact, is a point of pride for me and for Netflix. Cinephiles and film enthusiasts around the world will experience the magic of Orson Welles once again or for the very first time." 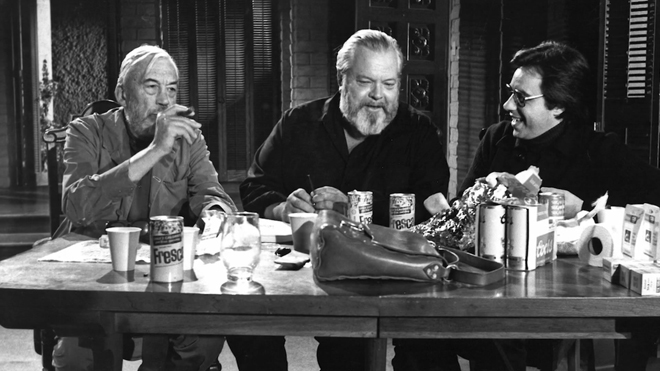 'The Other Side of The Wind' was first shot by Welles beginning in 1970, but has remained unfinished. Producer Frank Marshall, who served as a Production Manager on the original production, will oversee the restoration and completion of the film. He will be joined by producer Filip Jan Rymsza, along with consultation from Peter Bogdanovich.

"I can't quite believe it, but after 40 years of trying, I am so very grateful for the passion and perseverance from Netflix that has enabled us to, at long last, finally get into the cutting room to finish Orson’s last picture," said Frank Marshall.