A teaser for the final season of House of Cards headlines this week's collection of streaming trailers.

Netflix and Hulu have released new previews and info for several of their upcoming programs and films. In addition, FilmStruck has announced its new October lineup of movies for the Criterion Channel.

Little Things (Netflix, October 5) - Kavya (Mithila Palkar) and Dhruv (Dhruv Sehgal) are a young unmarried couple navigating the complicated world of relationships, careers, and aspirations in the fast-paced city of Mumbai, while always cherishing the little things that make life worth living. The series celebrates the sweet and sour moments of life and their new-age relationship.

Making a Murderer: Season 2 (Netflix, October 19) - Emmy Award-winning filmmakers Laura Ricciardi and Moira Demos return to the Midwest where they have exclusive access to Steven Avery and his co-defendant and nephew Brendan Dassey, their families and the legal teams fighting for justice on their behalf. Over the course of 10 new episodes, Making a Murderer Part 2 provides an in-depth look at the high-stakes postconviction process, exploring the emotional toll the process takes on all involved.

Wanderlust (Netflix, October 19) - Looks at how we build and maintain happy relationships and asks whether lifelong monogamy is possible – or even desirable. Toni Collette plays Joy Richards, a therapist trying to find a way to keep her spark alive with her husband after a cycling accident causes them to reassess their relationship. As we meet her family, friends, neighbours and clients, remarkable yet relatable stories of love, lust and forbidden desire emerge.

Wild District (Netflix, October 19) - Jhon Jeiver, a lethal guerrilla fighter who escapes the jungle after the signing of the Colombian Peace Agreements. He arrives in Bogotá escaping from his past, and tries to reinsert himself in society while looking to reconnect with his long lost family. But he soon finds himself wrapped in a web of crime and corruption, struggling to understand the ways of the concrete jungle, protect his family from his past, and faced with the moral dilemma of choosing what side of the law he wants to be on

Marvel’s Daredevil: Season 3 (Netflix, October 19) - Blinded as a young boy but imbued with extraordinary senses, Matt Murdock (Charlie Cox) fights against injustice by day as a lawyer, and by night as the Super Hero “Daredevil” in modern day Hell's Kitchen, New York City.

Adam Sandler: 100% Fresh (Netflix, October 23) - Adam Sandler takes his comical musical musings back out on the road, from comedy clubs to concert halls to one very unsuspecting subway station.

Shirkers (Netflix, October 26) - An inspired labor of love for zine-making teens Sandi Tan, Jasmine Ng and Sophie Siddique, Shirkers was a Singapore-made 1992 cult classic—or it would have been, had the 16mm footage not been stolen by their enigmatic American collaborator Georges Cardona, who disappeared. More than two decades later, Tan, now a novelist in L.A., returns to the country of her youth and to the memories of a man who both enabled and thwarted her dreams. Magically, too, she returns to the film itself, revived in a way she never could have imagined.

They'll Love Me When I'm Dead (Netflix, November 2) - Academy Award winner Morgan Neville (20 Feet from Stardom) tells the provocative story of legendary director Orson Welles during the final 15 years of his life, when he struggled to make a Hollywood comeback with one last radical gamble. It's the untold chapter of one of the greatest careers in film history.

Sacred Games: Season 2 (Netflix, Coming Soon) - A policeman, a criminal overlord, a Bollywood film star, politicians, cultists, spies, and terrorists—the lives of the privileged, the famous, the wretched, and the bloodthirsty interweave with cataclysmic consequences amid the chaos of modern-day Mumbai. The series is based on the critically-acclaimed best-selling novel Sacred Games by author Vikram Chandra.

Light as a Feather (Hulu, October 12) - An innocent game of “Light as a Feather, Stiff as a Board” goes wrong when the five teen girls who played start dying off in the exact way that was predicted, forcing the survivors to figure out why they’re being targeted – and whether the evil force hunting them down is one of their own.

Meanwhile, Criterion has revealed its October lineup of films for the Criterion Channel on the FilmStruck streaming service. Here's a full rundown of titles premiering in October:

Dr. Strangelove, or: How I Learned to Stop Worrying and Love the Bomb, Stanley Kubrick, 1964 (October 1) 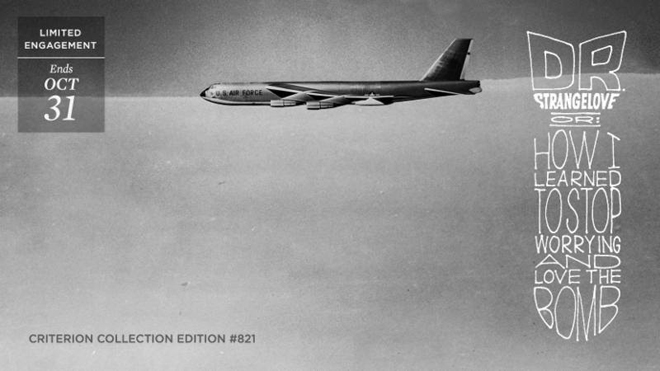