The acclaimed horror film heads to Blu-ray in September.

In an early announcement to retailers, Doppelganger Releasing and Music Box Films will be releasing 'Alleluia' on Blu-ray on September 22.

Based on notorious real-life "Lonely HeartsKillers" who make victims of their romantic liaisons, Alleluia is a chilling anti-lovestory from acclaimed Belgian horror auteur Fabrice Du Welz. Michel (Laurent Lucas) is a born womanizer and professional hustler with a penchant for wooing lonely, vulnerable widows and divorcees. When he meets introverted single mom Gloria (Lola Dueñas) online and treats her to an electrifying first date, she's left completely smitten.

Michel tries to swindle what he can out of the one-night stand, confessing that he dates lonely women in order to steal their money. But Gloria has other plans, abandoning her daughter and vowing to aid Michel's scam while masquerading as his sister. The toxically co-dependent lovers embark on a deadly odyssey amplified by wild sex, unbridled jealousy and frenzied forays into the dark arts, leading to a shocking series of savage, murderous scenarios.

An official selection at the 2014 Cannes Film Festival Directors' Fort night series, Alleluia was also the Grand Jury Prize winner at the 2015 NashvilleFilm Festival's Graveyard Shift Competition. Described as "a fire-charged thriller that spins a disturbing web of madness, jealousy, sex and murder" by Shelagh Rowan-Legg of TwitchFilm and "a grotesque masterpiece" by Marc Savlov of The Austin Chronicle, the film is a deliciously twisted thriller—a razor-sharp, blood-soaked shocker that breathes new life into the lovesick horror genre to serve up a tale of white-hot desperation and terrifying devotion.

You can find the latest specs for 'Alleluia' linked from our Blu-ray Release Schedule, where it is indexed under September 22. 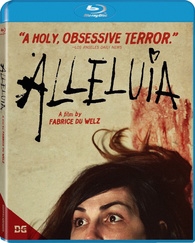