The award winning film will hit Blu-ray in January, and you can pre-order the disc now.

In an early announcement to retailers, Music Box Films is preparing 'The Green Prince' for Blu-ray on January 20.

A Palestinian in Ramallah, Mosab Hassan Yousef grows up angry and ready to fight Israel. Arrested for smuggling guns at the age of 17, he's interrogated by the Shin Bet, Israel's security service, and sent to prison. But shocked by Hamas's ruthless tactics in the prison and the organization's escalating campaign of suicide bombings outside, Mosab agrees to spy for Israel. For him, there is no greater shame. For his Shin Bet handler, Gonen, there is no greater prize: "operating" the oldest son of a founding member of Hamas.

Specs have not been detailed yet, but supplements will include: Documentary television special hosted by Ondi Timoner, featuring director Nadav Schirman; "Son of Hamas" TV interview with Mosab; Exclusive archive and interview extracts; Full color storyboards; and Theatrical trailer.

You can find the latest specs for 'The Green Prince' linked from our Blu-ray Release Schedule, where it's indexed under January 20. 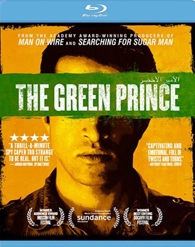 Discs mentioned in this article: (Click for specs and reviews)
The Green Prince (Blu-ray)