The French drama is heading to Blu-ray in September.

In an early announcement to retailers, Music Box Films is preparing 'The Innocents' for Blu-ray on September 27.

Warsaw, December 1945: the second World War is finally over and Mathilde is treating the last of the French survivors of the German camps. When a panicked Benedictine nun appears at the clinic one night begging Mathilde to follow her back to the convent, what she finds there is shocking: a holy sister about to give birth and several more in advanced stages of pregnancy. A non-believer, Mathilde enters the sisters' fiercely private world, dictated by the rituals of their order and the strict Rev. Mother (Agata Kulesza, Ida). Fearing the shame of exposure, the hostility of the new anti-Catholic Communist government, and facing an unprecedented crisis of faith, the nuns increasingly turn to Mathilde as their belief and traditions clash with harsh realities.


Specs and supplements have not been detailed yet.

You can find the latest specs for 'The Innocents' linked from our Blu-ray Release Schedule, where it's indexed under September 27. 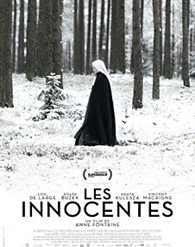 Discs mentioned in this article: (Click for specs and reviews)
The Innocents (2016) (Blu-ray)