Director Aleksandr Sokurov will take viewers on a unique tour of the Louvre Museum in June.

As previously reported, Music Box Films is preparing 'Francofonia' for Blu-ray on June 28.

Set against the backdrop of the Louvre Museum’s history and artworks, master director Alexander Sokurov (Russian Ark) applies his uniquely personal vision onto staged re-enactments and archives for this fascinating portrait of real-life characters Jacques Jaujard and Count Franziskus Wolff-Metternich and their compulsory collaboration at the Louvre Museum under the Nazi Occupation. These two remarkable men - enemies then collaborators - share an alliance which would become the driving force behind the preservation of museum treasures. In its exploration of the Louvre Museum as a living example of civilization, FRANCOFONIA is a stunning and urgently relevant meditation on the essential relationship between art, culture, and history.

You can find the latest specs for 'Francofonia' linked from our Blu-ray Release Schedule, where it's indexed under June 28. 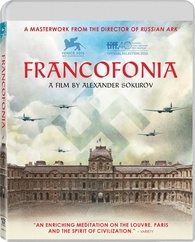