The Swedish film is coming to Blu-ray in December.

In an early announcement to retailers, Music Box Films is preparing 'A Man Called Ove' for Blu-ray on December 27.

Stepping from the pages of Fredrik Backman's international best-selling novel, Ove is the quintessential angry old man next door. An isolated retiree with strict principles and a short fuse, who spends his days enforcing block association rules that only he cares about, and visiting his wife s grave, Ove has given up on life. Enter a boisterous young family next door who accidentally flattens Ove's mailbox while moving in and earning his special brand of ire. Yet from this inauspicious beginning an unlikely friendship forms and we come to understand Ove s past happiness and heartbreaks. What emerges is a heartwarming tale of unreliable first impressions and the gentle reminder that life is sweeter when it's shared. One of Sweden's biggest locally-produced box office hits ever, director Hannes Holm finds the beating heart of his source material and Swedish star Rolf Lassgård, whose performance won him the Best Actor award at the 2016 Seattle Int l Film Festival, affectingly embodies the lovable curmudgeon Ove.

You can find the latest specs for 'A Man Called Ove' linked from our Blu-ray Release Schedule, where it's indexed under December 27. 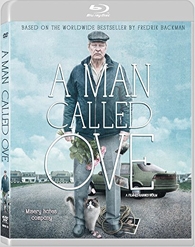 Discs mentioned in this article: (Click for specs and reviews)
A Man Called Ove (Blu-ray)