As reported by Variety, MoviePass is now enacting a Peak Pricing fee for select films and showtimes when the demand for a title is higher than usual. Peak Pricing is indicated by a red lightning bolt icon next to affected showtimes in the MoviePass app.

Current Peak Pricing fees are between $2 and $6 and are based on the popularity of a specific film and showtime. The practice is now active for all monthly subscribers and new annual subscribers. Meanwhile, users who signed up for an annual or quarterly plan before peak pricing launched will not be subject to the feature until their membership is up for renewal.

In an FAQ on their website, MoviePass states, "The new peak pricing feature is aimed at providing additional flexibility for us and our users around popular movies and times for which there is limited inventory. We are building peak pricing to be flexible and will be able to tweak it as needed based on the community’s response." 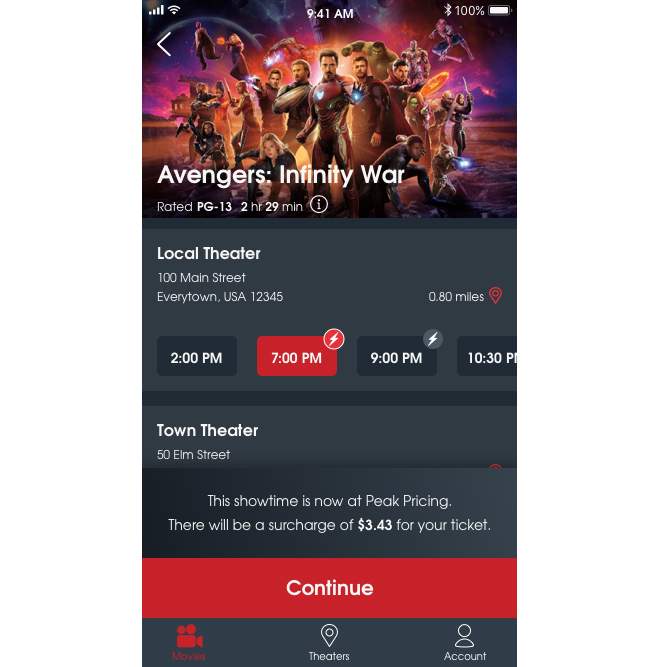 MoviePass allows subscribers to see one 2D movie per day for $9.95 per month. After signing up for the MoviePass Unlimited plan, users are sent a special MoviePass debit card. Customers can then select a theater and movie showtime from the MoviePass app. Once a user's smartphone GPS registers within 100 yards of the selected theater, subscribers can then check-in for the film they want to see. Credit is then transferred to the MoviePass debit card which can then be used to buy the ticket. Over 91% of theaters in the US currently work with MoviePass, but some chains have been attempting to limit their support, including AMC.

On that note, AMC recently launched its own rival movie ticket subscription service dubbed AMC Stubs A-List. The platform allows users to see three movies in any format at any AMC theater per week for $20 a month.