In an early announcement to retailers, Monterey Video is preparing 'No Pay, Nudity' for Blu-ray on December 13.

Aging actor Lester Rosenthal (Gabriel Byrne) has lost his way. In this often humorous yet warmly poignant story, love, friendship, jealousy, re-discovery, career, family, and friends (Nathan Lane, Frances Conroy) intertwine as Lester navigates the perplexing realities facing us all as we pursue dreams and dignity. A film about hanging out, hanging in and hanging on.

You can find the latest specs for 'No Pay, Nudity' linked from our Blu-ray Release Schedule, where it's indexed under December 13. 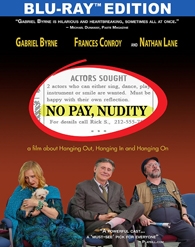 Discs mentioned in this article: (Click for specs and reviews)
No Pay, Nudity (Blu-ray)