The Japanese crime musical is planned for Blu-ray in December.

In an early announcement to retailers, Millennium Media will be releasing 'Tokyo Tribe' on Blu-ray on December 1.

In a futuristic, alternate-world Tokyo, the city is made up of ghetto slums and nightclub playgrounds where gangs of wayward youth rule the streets. The city is carved up into 'hoods, and the crossing of territorial lines quickly leads to riots and rumbles. On the turf ruled by the savage yakuza Big Buppa, the simmering tension is about to boil over into all-out war. Who will emerge victorious? Territory, friendship, pride, love... Everything is put on the line in a desperate struggle for supremacy!

Based on a popular Manga series (Tokyo Tribe 2 by Santa Inoue) and told almost entirely in rap verse (by some of Japan's top rappers), Tokyo Tribe has to be seen to be believed. The aggressive assault of the beats and rhymes wreaks havoc as a massive ensemble cast shocks, excites, and incites an unparalleled sonic war!

You can find the latest specs for 'Tokyo Tribe' linked from our Blu-ray Release Schedule, where it is indexed under December 1. 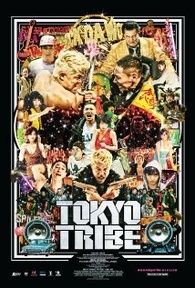