Daniel Alfredson's crime drama will arrive on Blu-ray in April, and you can pre-order the movie now.

In an early announcement to retailers, Millennium Media is preparing 'Kidnapping Mr. Heineken' for Blu-ray on April 14.

In 1983, a group of childhood friends pulled off the crime of the century: kidnapping one of the richest men in the world, the heir of the Heineken beer empire (Anthony Hopkins). The shocking capture--by gunpoint in broad daylight on the streets of Amsterdam--resulted in the largest ransom ever paid for a kidnapped individual. It was truly the perfect crime...until they got away with it. Based on a true story, 'Kidnapping Mr. Heineken' also stars Sam Worthington, Jim Sturgess and Ryan Kwanten.

You can find the latest specs for 'Kidnapping Mr. Heineken' linked from our Blu-ray Release Schedule, where it's indexed under April 14. 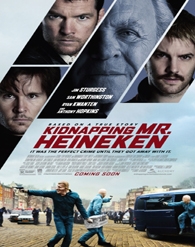