Join director James Cameron on a 3D dive to the bottom of the ocean this November. Pre-order it here.

In an early announcement to retailers, Millennium Media will be releasing 'James Cameron's Deepsea Challenge - 3D' on Blu-ray on November 11.

As a boy, filmmaker James Cameron dreamed of a journey to the deepest part of the ocean. This film is the dramatic fulfillment of that dream. It chronicles Cameron’s solo dive to the depths of the Mariana Trench—nearly seven miles beneath the ocean’s surface—piloting a submersible he designed himself. The risks were astounding. The footage is breathtaking. JAMES CAMERON’S DEEPSEA CHALLENGE 3D is a celebration of science, courage, and extraordinary human aspiration.

You can find the latest specs for 'James Cameron's Deepsea Challenge - 3D' linked from our Blu-ray Release Schedule, where it is indexed under November 11. 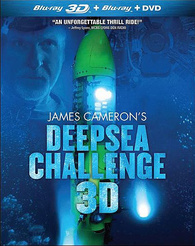