Academy Award nominee Henrik Ruben Genz's crime-thriller is planned for Blu-ray at the end of the month.

In an early announcement to retailers, Millennium Media is set to release 'Good People' on Blu-ray on October 28.

A young American couple (James Franco and Kate Hudson) falls into severe debt while renovating a home in London. When they discover that the tenant in the apartment below them was murdered and left $400,000 cash stashed in the ceiling, the couple thinks all of their problems are solved…but that's when very bad things start happening to good people.

You can find the latest specs for 'Good People' linked from our Blu-ray Release Schedule, where it is indexed under October 28. 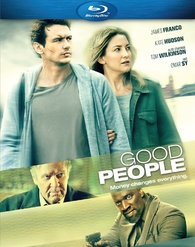