In an early announcement to retailers, Millennium Media will bring '88' to Blu-ray on January 6.

A fast paced thriller, 88 follows Gwen (Katherine Isabelle), a young woman who comes to in a road side diner with no idea where she is or how she got there. Split between two timelines, blurring reality and fiction, Gwen gets taken on a revenge-fueled journey as she seeks out the person responsible for her lover’s death.

You can find the latest specs for '88' linked from our Blu-ray Release Schedule, where it is indexed under January 6. 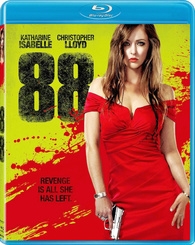