The classic TV crime drama starring James Garner is headed to the Blu-ray format this summer.

In an early announcement to retailers, Mill Creek is working on 'The Rockford Files: The Complete Series' for Blu-ray on June 13.

"Hello, this is Jim Rockford. At the tone, leave your name and message. I'll get back to you." {beep}

For only "two hundred dollars a day, plus expenses," the original and quintessential anti-hero detective, Jim Rockford, is on the case! Primetime Emmy Award-winner James Garner stars as the ex-con-turned-private-investigator who stays under the radar and takes on the cases of the lost and the dispossessed, chasing down seemingly long-dead clues in the sunbaked streets and seamy alleys of Los Angeles.

Specs and supplements have yet to be revealed, but suggested list price for the 22 disc set is $129.98.

You can find the latest specs for 'The Rockford Files: The Complete Series' linked from our Blu-ray Release Schedule, where it is indexed under June 13. 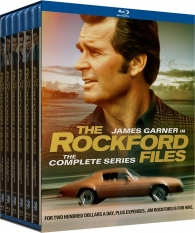