'That '70s Show: The Complete Series' Announced for Blu-ray

All 200 episodes of the comedy TV series will hit Blu-ray in November.

In an early announcement to retailers, Mill Creek has revealed 'That '70s Show: The Complete Series' will be coming to Blu-ray on November 3.

Remastered from the original film negatives, our favorite suburban kids from Wisconsin, Eric, Kelso, Jackie, Hyde, Donna and Fez, are making their way back to the basement in this definitive collection featuring all 200 episodes in widescreen high definition for an awesome Blu-ray experience! Set in the era of Led Zeppelin, TAB cola and Farrah Fawcett posters, this Emmy® award-winning sitcom aired from 1998-2006 with over 10 million weekly viewers in its first 6 seasons. This hilarious, coming of age, comedy features an all-star cast of Hollywood A-listers including Ashton Kutcher (Two and a Half Men), Mila Kunis (Jupiter Ascending), Topher Grace (Interstellar), Laura Prepon (Orange is the New Black), Wilmer Valderrama (From Dusk till Dawn) and Danny Masterson (Men at Work).

You can find the latest specs for 'That '70s Show: The Complete Series' linked from our Blu-ray Release Schedule, where it's indexed under November 3. 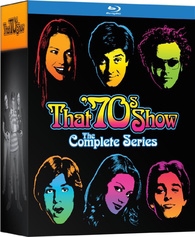