The political comedy will arrive on Blu-ray in March.

In an early announcement to retailers, Mill Creek Entertainment is preparing 'Swing Vote' for Blu-ray on March 15.

Kevin Costner stars in 'Swing Vote,' a clever, feel-good "landslide comedy winner. So funny and inspiring, you'll stand up and cheer!" (Pete Hammond, Hollywood.com). Bud Johnson's an ordinary dad drifting through life, caring about nothing except his overachieving daugther Molly. Trying to encourage him to get involved, Molly accidentally sets off a chain of events on Election Day that ends with the presidential race coming down to one vote -- Bud's. Comedic chaos ensues as Kelsey Grammer, Dennis Hopper, Nathan Lane, Stanley Tucci and George Lopez give all-star support in a witty and uplifting film that's "charming, funny, smart, touching and profound!" (Scott Mantz, Access Hollywood).

You can find the latest specs for 'Swing Vote' linked from our Blu-ray Release Schedule, where it's indexed under March 15. 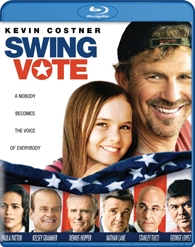