The comedy starring Christina Applegate and Jean Reno is coming to Blu-ray in March.

In an early announcement to retailers, Mill Creek Entertainment is preparing 'Just Visiting' for Blu-ray on March 15.

'Just Visiting' is one very funny fish-out-of-water comedy the whole family will enjoy. It's 12th century France and Count Thibault of Malfete (Jean Reno, MISSION: IMPOSSIBLE) finds his beautiful bride-to-be (Christina Applegate, TV's JESSE) done in by malevolent magic. So he and his loyal servant Andre (Christian Clavier, LES VISITEURS) request the help of a local wizard to right the wrong and bring his beloved back. But the wizardry goes awry and the pair is transported to 21st century Chicago where they meet Thibault's descendant Julia (Applegate) and her scheming fiance. With their timeless values of honor and courage, they wreak hilarious havoc as they foil diabolical plots in modern-day Chicago and try to find their way back home.

You can find the latest specs for 'Just Visiting' linked from our Blu-ray Release Schedule, where it's indexed under March 15. 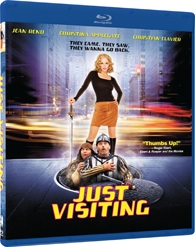