Five films starring "The Muscles from Brussels" will hit Blu-ray in March.

In an early announcement to retailers, Mill Creek Entertainment is preparing 'Jean Claude Van Damme - 5 Movie Collection' for Blu-ray on March 15. The set will include:

'The Hard Corps' - Jean-Claude Van Damme and Vivica A. Fox (Kill Bill Vo. I, Independence Day) star in this hard-hitting action film about justice and revenge. Van Damme stars as former Desert Storm special forces solider Phillip Sauvage. Sauvage is hired by a retired World Heavyweight champion turned wealthy entrepreneur, Wayne Barclay, to protect him and his family against a powerful rap music mogul and thug who has just been released from prison and is out to seek revenge against Barclay- the person that put him behind bars. To assist in the protection of the family, Sauvage sets up a team of young fighters and former soldiers who become "The Hard Corps."

'Knock Off' - Jean-Claude Van Damme stars in an explosive thriller set in Hong Kong's shady manufacturing scene during the 1997 handover to China! When a shipment of jeans to the U.S. proves counterfeit, Marcus Ray, the "King of The Knock-Offs" (Van Damme) finds himself at the center of a Russian Mafia plot to hold the United States security for ransom. Thousands of tiny micro-bombs, disguised within other manufactured goods, are scheduled for departure from Hong Kong to America. When Ray's company's jeans are found to be the housing for the explosives, he's the one man the CIA can count on to prevent certain disaster! In a territory where loyalty can change hands overnight, Marcus Ray's survival will depend on him knowing the fakes from the real thing.

'Universal Soldier: The Return' - Luc Deveraux (Jean-Claude Van Damme), the heroic former Universal Soldier, is about to be thrown into action once again. With the Cold War over and defense budgets slashed, the entire Universal Soldier team is facing elimination, including SETH, the super-computer that controls the ultra-warriors. Knowing that his days are numbered, SETH decides to seek revenge by destroying his creators and implementing a reign of terror on the outside world. Morphing into human form as the quintessential Universal Soldier (Michael Jai White), SETH begins to unleash his wicked plan with the aid of his top soldier (Bill Goldberg). When conventional military strength fails to thwart his efforts, Luc must take charge. As Luc faces SETH and his team of unstoppable soldiers, a battle pitting man against machine and good against evil ensues, offering the kind of high-intensity sci-fi action you't soon forget.

'Second in Command' - In this action-packed, edge-of-your-seat film, Jean-Claude Van Damme plays an official who's just been appointed as "Second in Command" to the U.S. Ambassador at an American Embassy in a small, turbulent Eastern European nation. When local insurgents attempt a coup d'etat, the nation's President takes refuge inside the embassy. The embassy is then besieged by the well-armed insurgents. The U.S. Ambassador is killed in the ensuing action, and now it's up to Van Damme and the embassy's small detachment of U.S. Marines to fend off the attackers.

You can find the latest specs for 'Jean Claude Van Damme - 5 Movie Collection' linked from our Blu-ray Release Schedule, where it's indexed under March 15. 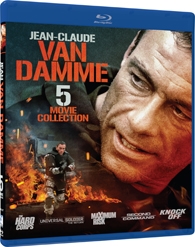