The action series based on the popular video game is gearing up for Blu-ray in March. You can pre-order the disc here.

In an early announcement to retailers, Microsoft is preparing 'Halo: Nightfall' for Blu-ray on  March 17.

'Halo: Nightfall' tells the personal story of Jameson Locke, a legendary manhunter and agent with the Office of Naval Intelligence (ONI), Earth s most powerful and secretive military branch. He and his team are investigating terrorist chatter on the distant colony world of Sedra, when they are caught in a horrific biological attack. Led by Locke, ONI agents are forced to coordinate with Randall Aiken, a local commander with a remarkable history and deep-rooted mistrust of ONI. As they unravel a plot that draws them to an ancient, hellish artifact, they will be forced to fight for their survival, question everything, and ultimately choose between their loyalties and their lives.

You can find the latest specs for 'Halo: Nightfall' linked from our Blu-ray Release Schedule, where it's indexed under March 17. 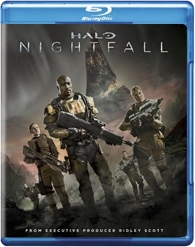 Discs mentioned in this article: (Click for specs and reviews)
Halo: Nightfall (Blu-ray)