In addition, McIntosh will donate $1,000 to the Save the Children organization for every Limited Edition Commemorative System sold.

"We are honored to be entering our 70th year of fulfilling Mr. Mac's vision of bringing world class home audio equipment to music and audio lovers everywhere," said McIntosh President Charlie Randall. "We've been fortunate to be able to do what we love to do for so long. We couldn't have done that without the support of all our customers, dealers and distributors, and I'd like to thank each one of them," Randall added. "And since we have been so fortunate, we are delighted to be able to give back to those in need via a donation to Save the Children, a truly worthwhile charity dedicated to helping children everywhere."

The Commemorative System amps and preamps are specially marked and share matching serial numbers. In addition, a "…for the love of music…" McIntosh History Book with an authenticating certificate is included as well. The Commemorative System packages will be limited to just 70 units, though the amp and preamp will be made available separately after the systems sell out. 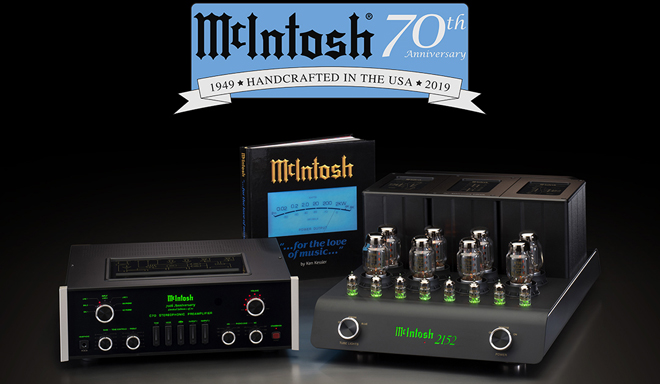 The MC2152 70th Anniversary Vacuum Tube Amplifier is rated for 150 Watts per channel and uses the company's Unity Coupled Circuit output transformer technology. In addition, the amp incorporates eight KT88 output vacuum tubes along with eight small signal tubes comprised of four 12AX7A and four 12AT7 vacuum tubes. LEDs are integrated under the signal tubes enabling them to glow their natural amber color, green, or blue. And when it comes to design, the unit features a bead blasted black anodized aluminum chassis accentuated with matte finish carbon fiber side panels. Meanwhile, a backlit laser cut McIntosh logo and classic McIntosh knobs are positioned on the front panel.

The McIntosh 70th Anniversary Limited Edition Commemorative System is now available for order via Authorized McIntosh dealers for an MSRP of $22,000. Units are expected to start shipping this month.