The superhero movie starring Paul Rudd and Michael Douglas is planned for Blu-ray in December.

In an early announcement to retailers, Disney/Buena Vista says 'Ant-Man' will hit Blu-ray and Blu-ray 3D on December 8.

The latest evolution of the Marvel Cinematic Universe brings a founding member of The Avengers to the big screen for the first time. Armed with the astonishing ability to shrink in scale but increase in strength, master thief Scott Lang (Rudd) must embrace his inner-hero and help his mentor, Dr. Hank Pym (Douglas), protect the secret behind his spectacular Ant-Man suit from a new generation of towering threats. Against seemingly insurmountable obstacles, Pym and Lang must plan and pull off a heist that will save the world.

Each release will feature 1080p video, lossless 7.1 audio, and supplements include: Audio Commentary with Peyton Reed and Paul Rudd; Making Of An Ant-Sized Heist: Set your watch and count down the action in this behind-the-scenes look at how to pull off a heist movie, including Scott Lang's heist "family," Ant-Man's costume, plus amazing stunts and effects; Let's Go To The Macroverse: Shrink down to size in this fascinating look at creating the world from Ant-Man's perspective, from macro photography through the subatomic; WHIH NewsFront: A collection of content, including a glimpse at the future of Pym Technologies with Darren Cross, anchor Christine Everhart's interview with soon-to-be-released prisoner Scott Lang on his notorious VistaCorp heist, and more; Never-Before-Seen Deleted Scenes; and a Gag Reel.

You can find the latest specs for 'Ant-Man' linked from our Blu-ray Release Schedule, where it is indexed under December 8. 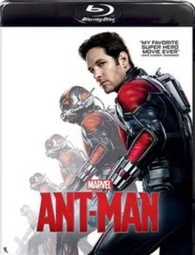 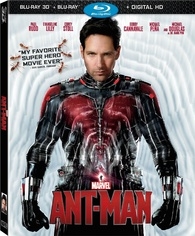