The white-knuckle fear-fest comes to Blu-ray in October.

In an early announcement to retailers, Magnolia will be releasing 'Last Shift' on Blu-ray on October 6.

Rookie police officer Jessica Loren (Juliana Harkavy - “The Walking Dead”) has been assigned the last shift at a closing police station and must wait for a hazmat crew collecting biomedical evidence. Ordered not to leave the station under any circumstance, Jessica comes to learn that it’s more than just an outdated station, it’s home to the ultimate embodiment of evil and his devoted followers. Cult leader Paymon has haunted the station ever since he and two of his followers committed suicide on the night of their arrest. Jessica is left to fend for herself in the devil’s playground.

Specs have yet to be revealed, but supplements include: A Journey Into Hell: The Making of Last Shift; Behind the Scenes Photo Gallery; Paymon Interrogation Viral Video; Poster Gallery; The Ballad of a Green Screen Guy; and The Sound of Evil: Behind the Foley/Sound Design.

You can find the latest specs for 'Last Shift' linked from our Blu-ray Release Schedule, where it's indexed under October 6. 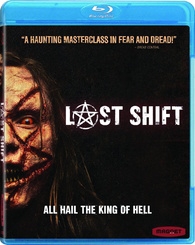