The crime comedy starring Simon Pegg is bound for Blu-ray in July.

In an early announcement to retailers, Magnolia is preparing to bring 'Kill Me Three Times' to Blu-ray on July 7.

The double crosses pile up in this comedic thriller starring Simon Pegg as a jaded hit man on a seemingly routine job. The assassin finds himself in the center of three tales of murder, mayhem, blackmail and revenge intertwine when a gambling addict, a small town "Lady Macbeth," a club owner, a policeman and a lover all converge on the same mark.

Specs haven't been revealed yet, but supplements include: Behind the Scenes, AXS TV: A Look At Kill Me Three Times, and the Theatrical Trailer.

You can find the latest specs for 'Kill Me Three Times' linked from our Blu-ray Release Schedule, where it is indexed under July 7. 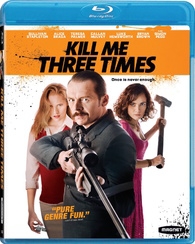