The story of Dirk Nowitzki's road to becoming NBA champion is planned for Blu-ray at the end of September.

In an early announcement to retailers, Magnolia says 'Nowitzki: The Perfect Shot' will arrive on Blu-ray on September 29.

Thirteen-time All-Star, League MVP, Finals MVP, NBA superstar Dirk Nowitzki is known as one of the greatest athletes of all time and the first non-American to lead his team to an NBA victory. NOWITZKI: THE PERFECT SHOT tells the incredible success story of Nowitzki and the fascinating relationship between the NBA star and his personal coach and mentor Holger Geschwindner. Holger, the German basketball legend and scientist, recognized Nowitzki's talent early on and helped Nowitzki invent a perfect jump shot by merging German engineering and the love of basketball. Also featuring an inside look at billionaire Mark Cuban's Dallas Mavericks and how the team has become one of the top to play in the NBA, NOWITZKI: THE PERFECT SHOT is a documentary about friendship, the fulfillment of dreams and the indestructible desire to win.

Specs have yet to be revealed, but supplements include extended interviews and a trailer.

You can find the latest specs for 'Nowitzki: The Perfect Shot' linked from our Blu-ray Release Schedule, where it is indexed under September 29. 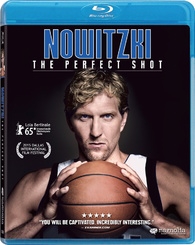