The comedy drama is now available for pre-order.

In an early announcement to retailers, Magnolia is preparing 'Tangerine' for Blu-ray on November 10.

A working girl tears through Tinseltown on Christmas Eve searching for the pimp who broke her heart. Directed by Sean Baker. Starring Kitana Kiki Rodriguez, Mya Taylor, and Karren Karagulian.

You can find the latest specs for 'Tangerine' linked from our Blu-ray Release Schedule, where it's indexed under November 10. 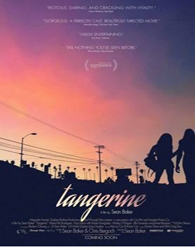 Discs mentioned in this article: (Click for specs and reviews)
Tangerine (Blu-ray)