The Norwegian adventure film is setting an expedition course toward Blu-ray in November. You can pre-order the disc here.

As previously reported, Magnolia is preparing 'Ragnarok' for Blu-ray on November 18.

Sigurd Svendsen is a Norwegian archaeologist who is fascinated by a viking ship found at the Oseberg burial mound. He believes that a runic inscription on the ship, which translates to "man knows little," holds the key to understanding the Norse myth of Ragnarok: the day when heaven and earth are destroyed. After finding similar inscriptions on a stone in Northern Norway, Sigurd, along with his kids and a colleague, begins an expedition to uncover the secret of the day of doom.

Specs have not been detailed yet, but supplements include: Ragnarok: The Visual Effects and Theatrical Trailer.

You can find the latest specs for 'Ragnarok' linked from our Blu-ray Release Schedule, where it's indexed under November 18. 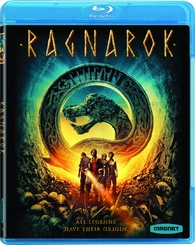