Nicolas Pesce's 'The Eyes of My Mother' Blu-ray Bound

The psychological horror film arrives on Blu-ray in March.

In an early announcement to retailers, Magnolia is working on 'The Eyes of My Mother' for Blu-ray on March 7.

In their secluded farmhouse, a mother, formerly a surgeon in Portugal, teaches her daughter, Francisca, to understand anatomy and be unfazed by death. One afternoon, a mysterious visitor horrifyingly shatters the idyll of Francisca's family life, deeply traumatizing the young girl, but also awakening some unique curiosities. Though she clings to her increasingly reticent father, Francisca's loneliness and scarred nature converge years later when her longing to connect with the world around her takes on a distinctly dark form.

You can find the latest specs for 'The Eyes of My Mother' linked from our Blu-ray Release Schedule, where it is indexed under March 7. 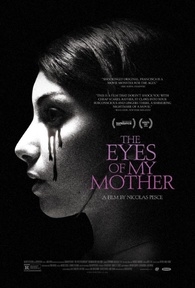