The legendary comedian will hit the stage on Blu-ray in February, and you can pre-order the disc here.

In an early announcement to retailers, Magnolia is preparing 'Richard Pryor: Omit the Logic' for Blu-ray on February 3.

Mike Epps, Richard Pryor Jr. and others recount the culture-defining influence of Richard Pryor one of America's most brilliant comic minds in this new documentary. Pryor remains an inspiration to many: a man who broke taboos, provoked change and propelled himself through life as a result of sheer force of personality. Directed by Emmy® winning filmmaker Marina Zenovich, executive produced by Emmy® winning producer Roy Ackerman and Pryor's widow, Jennifer Lee Pryor.

You can find the latest specs for 'Richard Pryor: Omit the Logic' linked from our Blu-ray Release Schedule, where it's indexed under February 3. 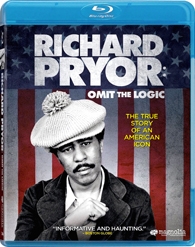 Discs mentioned in this article: (Click for specs and reviews)
Richard Pryor: Omit the Logic (Blu-ray)