The acclaimed skydiving documentary falls to Blu-ray in March.

In an early announcement to retailers, Magnolia will be releasing 'Sunshine Superman' on Blu-ray on March 1.

Sunshine Superman combines Carl Boenish's own 16mm archive footage with detailed re-enactments for an "awe-inspiring" (The Hollywood Reporter) portrait of the man who broke the boundaries of what was deemed humanly possible. The pulse-pounding film follows Boenish through his early days as a passionate skydiver to his first experiments with BASE jumping, setting records and developing methods that continue to inspire countless extreme athletes to today. A maverick who started a movement, the "spellbinding" (Yahoo! Movies) documentary explores how Boenish, alongside his wife Jean, also experimented with filming their pioneering jumps to achieve truly breathtaking and cinematic footage of their "glorious daredevilry" (The New York Times). An official selection of the 2014 Toronto International Film Festival and 2014 New York Film Festival, Sunshine Superman is "a thrill ride" (IndieWire) audiences will never forget.

You can find the latest specs for 'Sunshine Superman' linked from our Blu-ray Release Schedule, where it is indexed under March 1. 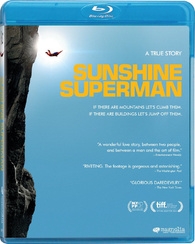