The anthology horror flick will go viral on Blu-ray in February. You can pre-order the disc here.

In an early announcement to retailers, Magnolia is preparing 'V/H/S: Viral' for Blu-ray on February 17.

A police chase after a deranged ice cream truck has captivated the attention of the greater Los Angeles area. Dozens of fame---obsessed teens flock to the streets with their video cameras and camera phones, hell---bent on capturing the next viral video. But there is something far more sinister occurring in the streets of L.A. than a simple police chase. A resounding effect is created onto all those obsessed with capturing salacious footage for no other purpose than to amuse or titillate. Soon the discovery becomes that they themselves are the stars of the next video, one where they face their own death.

Specs have not been detailed yet, but supplements will include: Gorgeous Vortex – A Short Film by Todd Lincoln; Audio Commentary with Directors; Bonestorm: Behind the Scenes Featurette; FX Storyboards; Galleries; Dante the Great: Behind The Magic of Dante The Great; Photo Gallery; Director Interviews; and AXS TV: A Look at V/H/S: Viral.

You can find the latest specs for 'V/H/S: Viral' linked from our Blu-ray Release Schedule, where it's indexed under February 17. 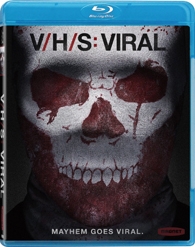 Discs mentioned in this article: (Click for specs and reviews)
V/H/S: Viral (Blu-ray)