Both releases will hit stores in January.

In an early announcement to retailers, Magnolia will be releasing 'The Two Faces of January' and 'Honeymoon' on Blu-ray on January 13.

'The Two Faces of January' - Screenwriter Hossein Amini makes a stylish directing debut with this sleek thriller set in Greece and Istanbul, 1962. Intrigue begins at the Parthenon when wealthy American tourists Chester MacFarland (Viggo Mortensen) and his young wife Collete (Kirsten Dunst) meet American expat Rydal (Oscar Isaac), a scammer working as a tour guide. Instead of becoming his latest marks, the two befriend him, but a murder at the couple's hotel puts all three on the run together and creates a precarious bond between them as the trio's allegiance is put to the test.

Special features will include Behind-the-Scenes Featurette and the Theatrical Trailer.

'Honeymoon' - Young newlyweds Paul (Harry Treadaway) and Bea (Rose Leslie) travel to a remote lake countryside for their honeymoon, where the promise of private romance awaits them. Shortly after arriving, Paul finds Bea wandering and disoriented in the middle of the night. As she becomes more distant and her behavior increasingly peculiar, Paul begins to suspect something more sinister than sleepwalking took place in the woods.

Supplements will include Making of Honeymoon, Effects, AXS TV: A Look At Honeymoon, and the Theatrical Trailer.

You can find the latest specs for 'The Two Faces of January' and 'Honeymoon' linked from our Blu-ray Release Schedule, where they are indexed under January 13. 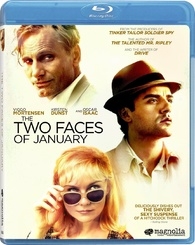 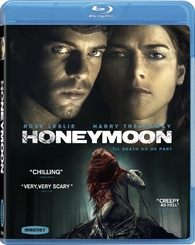