Magnolia Preps 'A War' for Blu-ray in June

The critically-acclaimed, Academy Award nominated film will be getting the Blu-ray treatment in June.

As previously reported, Magnolia has revealed that 'A War' will hit Blu-ray on June 7, and pre-orders are now live.

Company commander Claus M. Pedersen (Pilou Asbæk) and his men are stationed in an Afghan province. Meanwhile back in Denmark Claus' wife Maria (Tuva Novotny) is trying to hold everyday life together with a husband at war and three children missing their father. During a routine mission, the soldiers are caught in heavy crossfire and in order to save his men, Claus makes a decision that has grave consequences for him - and his family back home.

In his Academy Award Nominated film, A War, director Tobias Lindholm employs those who have been closest to the conflict, using Danish soldiers and Taliban warriors, relatives and refugees, as he strives towards realism.

You can find the latest specs for 'A War' linked from our Blu-ray Release Schedule, where it's indexed under June 7. 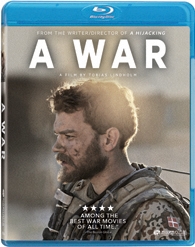 Discs mentioned in this article: (Click for specs and reviews)
A War (Blu-ray)