The romantic comedy is heading to Blu-ray in March, and pre-orders are now live.

In an early announcement to retailers, Magnolia is preparing 'Life Partners' for Blu-ray on March 3.

At 29, the most long-term relationship Sasha (Leighton Meester) and Paige (Gillian Jacobs) have ever been in is with each other, using their co-dependent friendship as an excuse not to venture out into the dating world alone. But when Paige meets nerdy Tim (Adam Brody) and starts to get serious for the first time, the nature of their friendship begins to shift. Fearing she's being cast aside, Sasha tries to keep their relationship the same, but does growing up also mean growing apart?

You can find the latest specs for 'Life Partners' linked from our Blu-ray Release Schedule, where it's indexed under March 3. 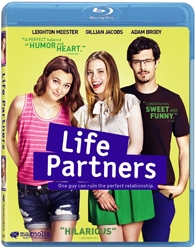 Discs mentioned in this article: (Click for specs and reviews)
Life Partners (Blu-ray)