The R-rated film starring Michael Fassbender, Domhnall Gleeson, and Maggie Gyllenhaal will be available on Blu-ray in December. Pre-orders are now available.

In an early announcement to retailers, Magnolia will be releasing 'Frank' on Blu-ray on December 9.

Michael Fassbender stars as Frank, a genius rock musician who performs wearing a giant fake head that he never removes. Things get rocky between his protective bandmate Clara (Maggie Gyllenhaal) and newcomer Jon (Domhnall Gleeson), who is convinced they're meant for stardom. The band lands their biggest gig, but are they ready? And is the world?

Specs haven't been revealed yet, but supplements include: AXS TV: A Look at Frank and Theatrical Trailer.

You can find the latest specs for 'Frank' linked from our Blu-ray Release Schedule, where it's indexed under December 9. 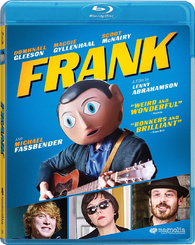