The award winning film will arrive on Blu-ray in July, and you can pre-order the disc here.

In an early announcement to retailers, Magnolia is preparing 'White God' for Blu-ray on July 28.

When young Lili is forced to give up her beloved dog Hagen, because it's mixed-breed heritage is deemed 'unfit' by The State, she and the dog begin a dangerous journey back towards each other. At the same time, all the unwanted, unloved and so-called 'unfit' dogs rise up under a new leader, Hagen, the one-time housepet who has learned all too well from his 'Masters' in his journey through the streets and animal control centers how to bite the hands that beats him.

The Blu-ray will feature 1080p video, a DTS-HD MA 5.1 soundtrack, and supplements will include: Behind The Scenes of White God; Interview With Writer/Director Kornél Mundruczó; and an Interview With Animal Coordinator/Technical Advisor Teresa Ann Miller.

You can find the latest specs for 'White God' linked from our Blu-ray Release Schedule, where it's indexed under July 28. 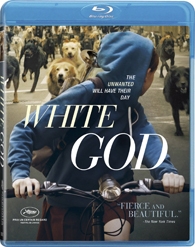 Discs mentioned in this article: (Click for specs and reviews)
White God (Blu-ray)