nominee for "Best Music Documentary" by the International Documentary Association arrives on Blu-ray next month.

In an early announcement to retailers, Magnolia says 'The Wrecking Crew!' will hit Blu-ray on June 16.

What the Funk Brothers did for Motown…The Wrecking Crew did, only bigger, for the West Coast sound. Six years in a row in the 1960s and early 1970s, the Grammy for "Record of the Year" went to Wrecking Crew recordings. THE WRECKING CREW tells the story of the unsung musicians that provided the backbeat, the bottom and the swinging melody that drove many of the number one hits of the 1960s. It didn't matter if it was Nat "King" Cole, Frank Sinatra, Nancy Sinatra, The Monkees, The Byrds or The Beach Boys, these dedicated musicians brought the flair and musicianship that made the American "West Coast sound" a dominant cultural force around the world.

Specs have yet to be revealed, but supplements include an assortment of deleted scenes.

You can find the latest specs for 'The Wrecking Crew!' linked from our Blu-ray Release Schedule, where it is indexed under June 16. 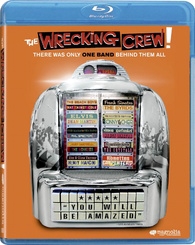