Catch 'The Wave' on Blu-ray in June

In an early announcement to retailers, Magnolia has revealed 'The Wave' will splash down on Blu-ray on June 21.

Nestled in Norway's Sunnmøre region, Geiranger is one of the most spectacular tourist draws on the planet. With the mountain Åkerneset overlooking the village — and constantly threatening to collapse into the fjord — it is also a place where cataclysm could strike at any moment. After putting in several years at Geiranger's warning centre, geologist Kristian (Kristoffer Joner) is moving on to a prestigious gig with an oil company. But the very day he's about to drive his family to their new life in the city, Kristian senses something isn't right. The substrata are shifting. No one wants to believe that this could be the big one, especially with tourist season at its peak, but when that mountain begins to crumble, every soul in Geiranger has 10 minutes to get to high ground before a tsunami hits, consuming everything in its path.

Specs have yet to be revealed, but supplements include: Behind the Scenes of The Wave; The Wave Visual Effects Featurettes; Interview with Director Roar Uthaug; and Theatrical Trailer.

You can find the latest specs for 'The Wave' linked from our Blu-ray Release Schedule, where it is indexed under June 21. 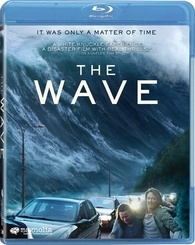