The documentary film is dancing toward Blu-ray in May, and you can pre-order the disc now.

In an early announcement to retailers, Magnolia is preparing 'Ballet 422' for Blu-ray on May 26.

When 25-year-old NYCB dancer Justin Peck begins to emerge as a promising young choreographer, he is commissioned to create a new ballet for the Company's 2013 Winter Season. With unprecedented access to an elite world, the film follows Peck as he collaborates with musicians, lighting designers, costume designers and his fellow dancers to create Paz de la Jolla, NYCB's 422nd new ballet. 'Ballet 422' is an unembellished vérité portrait of a process that has never before been documented at New York City Ballet in its entirety.

You can find the latest specs for 'Ballet 422' linked from our Blu-ray Release Schedule, where it's indexed under May 26. 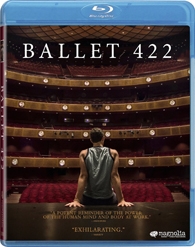 Discs mentioned in this article: (Click for specs and reviews)
Ballet 422 (Blu-ray)