The acclaimed documentary will be downloaded to Blu-ray in March.

As previously reported, Magnolia will be releasing 'Steve Jobs: The Man in the Machine' on Blu-ray on March 15.

Oscar-winning director Alex Gibney (Going Clear: Scientology and the Prison of Belief) pulls no punches in his portrait of Apple founder Steve Jobs and his legacy. This probing and unflinching look at the life and aftermath of the bold, brilliant and at times ruthless iconoclast explores what accounted for the grief of so many when he died. Steve Jobs: The Man in the Machine is evocative and nuanced in capturing the essence of the Apple legend and his values, which continue to shape the culture of Silicon Valley to this day.

Specs have yet to be revealed, but supplements include: Interview With Director Alex Gibney; Deleted Scenes; and a Theatrical Trailer.

You can find the latest specs for 'Steve Jobs: The Man in the Machine' linked from our Blu-ray Release Schedule, where it is indexed under March 15. 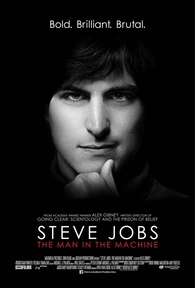