The release will hit stores in mid-December. Pre-order your copy now.

In an early announcement to retailers, MPI will be releasing 'At the Devil's Door' on Blu-ray on December 16.

When ambitious young real estate agent Leigh (Catalina Sandino Moreno, 'Che') is asked to sell a house with a checkered past, she crosses paths with a disturbed girl whom she learns is the runaway daughter of the couple selling the property. When Leigh tries to intervene and help her, she becomes entangled with a supernatural force that soon pulls Leigh's artist sister Vera (Naya Rivera, 'Glee') into its web — and has sinister plans for both of them. With nail-biting terror, writer/director Nicholas McCarthy's ('The Pact') 'At the Devil's Door' is an unforgettable venture into the supernatural.

The Blu-ray will feature 1080p video, a lossless 5.1 soundtrack, and supplements include an audio commentary, making of featurette, deleted scenes, and trailer.

You can find the latest specs for 'At the Devil's Door' linked from our Blu-ray Release Schedule, where it is indexed under December 16. 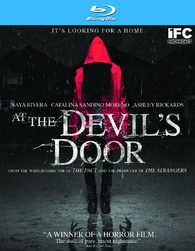