The drama starring Sam Waterston and Kristen Stewart is coming to Blu-ray in May.

In an early announcement to retailers, MPI is preparing 'Anesthesia' for Blu-ray on May 3.

A snowy New York City night, a beloved teacher, a shocking crime: this provocative drama pieces together the puzzle of a man's life just before it changes forever. While on his way home one evening, Walter Zarrow (Sam Waterston), a popular Columbia University philosophy professor, is violently attacked on the street. Flash back one week, as actor-director Tim Blake Nelson traces the domino effect of events that led up to this seemingly senseless assault. Along the way, hidden connections between a seemingly disparate group of people-including a self-destructive student (Kristen Stewart), a hard-drinking suburban housewife (Gretchen Mol), and a desperate junkie (K. Todd Freeman)-emerge, forming a complex, engrossing mosaic of lost souls united by tragedy. The stellar ensemble cast includes Glenn Close and Michael K. Williams.

You can find the latest specs for 'Anesthesia' linked from our Blu-ray Release Schedule, where it's indexed under May 3. 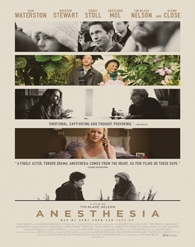 Discs mentioned in this article: (Click for specs and reviews)
Anesthesia (Blu-ray)