'The Damned' Planned for Blu-ray

Victor Garcia's horror flick will be unleashed on Blu-ray this November. You can pre-order it here.

In an early announcement to retailers, MPI will be bringing 'The Damned' to Blu-ray on November 11.

En route from having retrieved his rebellious teenage daughter from the city of Bogota, Colombia, American David Reynolds (Peter Facinelli, 'Twilight') and his new fiancée (Sophia Myles, 'Tristan + Isolde') suffer a car crash that leaves them stranded at a rundown, isolated inn. Sensing something sinister from the mysterious old innkeeper, the family discovers a young girl locked in the basement and determines to set her free. But little do they know that the seemingly innocent girl is an embodiment of pure evil, and that their act of charity could have cataclysmic consequences. Both exotic and terrifying, 'The Damned' is a white-knuckle suspense ride from start to finish.

The Blu-ray will feature 1080p video, a lossless 5.1 soundtrack, and supplements include: Audio Commentary, Making of Featurette, and Original Trailer.

You can find the latest specs for 'The Damned' linked from our Blu-ray Release Schedule, where it is indexed under November 11. 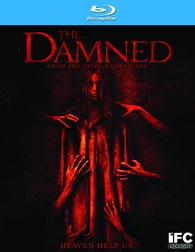