Ted Geoghegan's Chilling 'We Are Still Here' Bound for Blu-ray

The critically-acclaimed horror flick will haunt Blu-ray in October.

In an early announcement to retailers, MPI and Dark Sky Films will be releasing 'We Are Still Here' on Blu-ray on October 6.

We Are Still Here is an atmospheric, classically constructed haunted house story, but with modern, heightened tension and action. After their teenage son Bobby is killed in a car crash, Paul and Anne Sacchetti move to an isolated 19th-century house in the New England countryside to try to start a new life. But soon the grieving couple begin to sense they are not alone in the old house. The Sacchettis' psychic friend May arrives to investigate Anne's hopeful feeling that Bobby's spirit is also there.

Unknowingly, the Sacchettis become the prey of a family of vengeful spirits that reside in their new home, and before long they discover that the seemingly peaceful town is hiding a terrifyingly dark secret. Now they must find a way to overcome their sorrow and fight back against both the living and dead as the malicious ghosts threaten to pull their souls - and the soul of their lost son - into hell with them.

The Blu-ray will feature 1080p video, lossless 5.1 audio, and supplements include: Commentary with Writer-Director Ted Geoghegan and Producer Travis Stevens; Behind the Scenes - Geoghegan and Stevens discuss the genesis of the project and the challenges and successes of bringing the script to life; Trailer and Teaser.

You can find the latest specs for 'We Are Still Here' linked from our Blu-ray Release Schedule, where it is indexed under October 6. 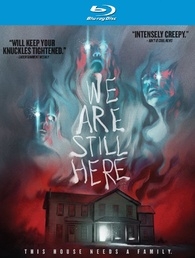