The 1984 series is headed for Blu-ray in September. You can pre-order it here.

In an early announcement to retailers, MPI will be bringing 'Sherlock Holmes: The Complete Series' to Blu-ray on September 30.

He is known as the Greatest Detective Who Never Lived. Written by Sir Arthur Conan Doyle, Sherlock Holmes comes alive on film in this landmark television series starring Jeremy Brett.

All the classic tales are here for the first time on Blu-ray, as the Great Detective and his faithful companion, Dr. Watson, tangle with the terrifying Hound of the Baskervilles, the beautiful adventuress Irene Adler, and the dastardly villains Colonel Sebastian Moran, Charles Augustus Milverton, and the Napoleon of Crime himself, Professor James Moriarty.

Specs for the 12-disc set haven't been revealed yet, but supplements include: Audio Commentaries, Interviews, and more.

You can find the latest specs for 'Sherlock Holmes: The Complete Series' linked from our Blu-ray Release Schedule, where it is indexed under September 30. 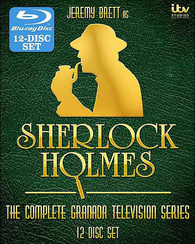