The acclaimed film will arrive on Blu-ray in December.

In an early announcement to retailers, MPI and Dark Sky Films is working on 'One Eyed Girl' for Blu-ray on December 8.

On the brink of a nervous breakdown, young psychiatrist Travis meets Grace, a representative of a secret church that promises salvation to even the most troubled of its members. Intrigued, Travis joins the church and meets its leader, the charismatic Father Jay, who indoctrinates him into his sect's sometimes radical practices. When a series of tragedies befalls Father Jay and his flock, Travis must decide if his loyalty truly lies with Father Jay, the ever-elusive Grace, or himself. Winner - Austin Film Festival's Dark Matters Best Film Award.

You can find the latest specs for 'One Eyed Girl' linked from our Blu-ray Release Schedule, where it is indexed under December 8. 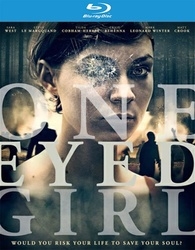